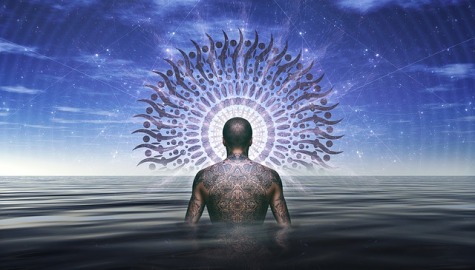 Resting coiled like a snake at the base of the root chakra, kundalini is a potent spiritual energy believed to carry the potential for transformation and enlightenment. To awaken it is no small task, as it requires years of dedicated practice.

If you find a kundalini-centered meditation and stick with it, you could have some powerful and unexpected breakthroughs.

Some have likened the breakthroughs associated with kundalini meditation to a psychedelic experience. It’s a step up from a traditional meditation practice, with specific focus put into raising this coiled energy from the root chakra up through the crown chakra or sahasrara.

Kundalini meditation and similarly strict practices are the reason we have the stereotype of a monk meditating in the mountains for years on end. Being free from the distractions of modern society aids the monk in his or her practice. While the whole thing might seem strange or pointless, there are rewards at the end of such a long, dark tunnel.

I have no experience with kundalini and barely enough experience with regular meditation. Because of this, I prefer to read wisdom from teachers and students of the kundalini path who’ve done the work and attempted to describe what they saw. To be fair, though, their words can only go so far.

With that in mind, here are ten insightful quotes on kundalini awakening and its associated practices.

In our first quote, we learn that this energy is often referred to as nectar, ambrosia, or some other metaphorical holy liquid.

Some have interpreted the “Water of Immortality” referenced in this passage as kundalini energy rising and washing over those who’ve raised it up through their heart chakra. As we’ll learn, different teachers and traditions use similar terms to describe this energy. Below, Jesus vaguely references it in Revelation 21:6.

Although it can depend on how you interpret this verse, it sounds a lot like the preceding Hermes quote. They both appear to describe kundalini in veiled terms, hinting that an interaction with this “water of life” or “water of immortality” is essential to becoming enlightened or one with God.

Jesus and Hermes aren’t the only teachers to describe kundalini this way. Some describe it as a flowing current.

You gain access to this current through devoted practice. First, you dip your toes into the water by starting and sticking to a kundalini-focused meditation. Overtime, the current should open for you. From there, you can explore it little by little until an eventual breakthrough sweeps you off your feet.

At some point, kundalini enlightenment will find its way to you and change everything.

As Swami Nikhilananda explains below, the first step is to become aware of this energy.

Most spiritual philosophy encourages or is centered on a meditative practice, but those focused on raising the kundalini energy seem to be the most powerful of them all. It is the beginning of the journey and the launching point into a new, unfamiliar state of consciousness.

Kundalini meditation is also among the strictest practices, as real results require a real, continual effort. Taking interest in it can be the beginning of a grueling but highly rewarding journey.

To get the most out of your practice, it helps to learn about the role of the chakras referenced throughout this article. Below, Paramahansa Ramakrishna describes kundalini’s ascent through these energy centers.

Just above the forehead is the crown or sahasrara chakra. You reach a tipping point when the kundalini passes through the sahasrara, bringing you into a trance-like enlightened state that is the culmination of years of practice. You essentially get to see the other side.

This is the ultimate breakthrough, but according to Sri Ramakrishna, you can experience a similar breakthrough beforehand when the kundalini reaches the heart chakra.

Sri Ramakrishna suggests that an awakening begins when the kundalini reaches your heart. From there up to the time it reaches the crown, you might have some incredible breakthroughs and see some interesting things. His explanation of what it’s like is fascinating; especially when you consider how far removed it is from consensus reality.

It’s interesting to think we could experience the wonders these teachers speak of. Like anything worthwhile, it just takes a lot of practice and the willingness to keep going when you feel impatient or disappointed that nothing has happened.

Like others, Franklin Merrell-Wolff referred to kundalini energy as a current. As he explains below, once he experienced it for himself, he started calling it by many names.

“It is … the ‘Soma,’ the ‘Ambrosia of the Gods,’ the ‘Elixir of Life,’ the ‘Water of Life’ of Jesus, and the ‘Baptism of the Spirit’ of St. Paul. It is more than related to Immortality; in fact it is Identical with Immortality.” (7)

Enlightenment frees you from the cycle of death and rebirth, granting immortality and an understanding of the infinite nature of life. No matter how they describe it, most agree that it’s a deeply mysterious initiation brought on by a focused effort to raise the current of kundalini energy up to the sahasrara.

Below, Franklin describes what it was like to be in the current.

Franklin’s description sounds nothing like a regular meditation. This is because he was devoted to a strict practice that paid off with intense and life-changing spiritual experiences. He touched upon what is arguably the source of all love and joy, discovering it’s an intrinsic part of his own essence.

In our next quote, he tries to explain how the current affects those who tap into it.

“All over and through and through there is a quality that may well be described as physiological happiness. The organism feels no craving for sensuous distraction in order to find enjoyment. The external life of the individual could appear highly ascetic and austere to others, but all the while it would be profoundly happy. …

“…In the Current lies the highest possible value which, from the relative standpoint, we call enjoyment.” (9)

Some of us operate from a place of scarcity when it comes to love, happiness, or feeling satisfied. A meditation practice can help you rest and recharge, ensuring you can operate with an abundance of these feelings and share them when your cup runneth over.

Most of us desperately want love, but instead of looking within, we try to find it in material things or the acceptance of the people around us. If the enlightened state really is the source of all love and joy, then the best way to replenish these feelings you may have lost is to meditate and let them back in.

In our final excerpt, we learn from Sri Ramakrishna about the difficulty of describing enlightenment without falling so deep into it that speaking becomes impossible.

“Sometimes I think I shall tell you everything about what I see and feel when that mysterious power rises up through the spinal column. When it has come up to this, or even this (pointing to the heart and throat), somebody stops my mouth, as it were, and I am adrift.

“I make up my mind to relate to you what I feel when the Kundalini goes beyond the throat, but as I think over it, up goes the mind at a bound, and there is an end to the matter.”

A student speaking about Sri Ramakrishna: “Many a time did the Master attempt to describe this state, but failed every time. One day he was determined to tell and went on until the power reached the throat.

“Then pointing to the sixth centre, opposite the junction of the eyebrows, he said, ‘When the mind reaches this point one catches a vision of the Paramatman and falls into Samadhi. Only a thin, transparent veil intervenes between the Jiva and the Paramatman.

“‘He then sees like this’ — and as he attempted to explain it in detail he fell into Samadhi. When his mind came down a little he tried again, and again he was immersed in Samadhi! After repeated attempts he said with tears in his eyes, ‘Well, I sincerely wish to tell you everything, but [the Divine Mother] won’t let me do so. She gagged me!’” (10)

Skeptics might say this is a cop-out, whereas anyone who’s ever been deep in meditation would understand how difficult it can be to describe the indescribable. As with anything, the only way to confirm if all this is real is to meditate and find out.

To experience or understand the divine in a deep, personal way, we must at some point let go of the need for a teacher so we can develop our own relationship with it. Even Sri Ramakrishna, who had a lot of philosophical wisdom to share, could not properly describe the enlightened state.

If the thought of chakras or kundalini energy fascinates you, then by all means, study it and learn what those who’ve mastered it have to say. The only way to understand it, however, is through experience.

You might feel it as a current of energy that grants access to a state of pure love. You might try to explain this to others only to find that it’s too difficult. Or, you might decide the results take too long to materialize and give up.

Regardless, these ideas have survived through the centuries for a reason. We’re still talking about them today and likely will be for a long time. Thanks to the internet, they have a greater following than ever. Now seems like the best time to spread the word.

The path to enlightenment involves the kundalini serpent rising through each chakra, making way for the love, joy, and compassion that seem so scarce in the world. We may not know everything about what awaits on the other side, but if it’s as full of love as these teachers say it is, then it’s worth trying to find out.

If you liked this article, consider supporting the Openhearted Rebellion blog with a monthly subscription:

I’m a twenty-something writer & blogger with an interest in spirituality, love, awareness, activism, and other crazy stuff. I run Openhearted Rebellion – a blog dedicated to sharing wisdom and encouraging a revolution that begins in the heart.

I also run Canna Words – a blog in which I share some of my research and opinions on cannabis. There, I write about everything from legalization to hemp and the various ways people use the cannabis plant.

I’ve contributed to a few awesome websites that include Waking Times, Wake Up World, Golden Age of Gaia, and The Master Shift. I can be found on Facebook (facebook.com/wesannac, facebook.com/cultureofawareness) and Twitter (twitter.com/Wes_Annac, https://twitter.com/love rebellion)

If you enjoyed this post and want to support my work, consider donating via PayPal to wesremal@yahoo.com.

Share freely with attribution to Wes Annac and Openhearted Rebellion