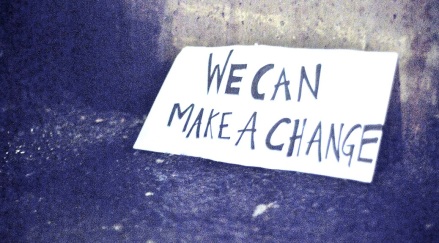 Note from Wes: Wake-Up World recently published my article about ditching the system and embracing compassion. I re-post it here for those who may have missed it here on the blog before.

By Wes Annac, Contributing writer for Wake Up World

You don’t need me to tell you things are crazy right now. People are still freaking out about the U.S. election result, and many are left scratching their heads wondering how it happened and what will happen once he takes office.

But what many people fail to see, and what some of my friends in the activist community have helped me to remember, is that things have always been crazy. The world is really no different today than it was yesterday; rather it seems that, for the first time, people are realizing there’s something deeply wrong with the world. They see now how messed up our society can be — but they have no idea how deep the rabbit hole actually goes…

The World Is Hurting

My intention isn’t to be negative, bitter or in denial of the good in the world. I think we should focus on the good as much as the things that need fixed, and we don’t have to fix or raise awareness of them in a bitter way. Instead, we can address them with compassion and a sense of urgency to ensure something is done now.

But I must admit it surprises me that it takes a Trump presidency for people to see that the world is not what it should be, because a mild interest in world events will quickly make this clear. Where are these people when news breaks about the latest hospital bombing overseas, or the U.S. military conducting torture in places like the former military prison Abu Ghraib?

The world has been hurting for longer than most prefer to consider. Corruption has plagued this supposedly free country for most of its history, and what we know as morality, goodness and righteousness are gone from our political system.

Looking the Other Way

It’s not just a problem with the U.S., and it doesn’t just affect politics. In my opinion, the root of our problems is the fact that we’ve turned our backs on love and compassion: two crucial qualities for the survival of any civilization. This causes us to look the other way when we learn about political corruption and crimes against humanity which we wouldn’t tolerate if they were happening where we live. It causes people to vote for someone who runs on a platform of polarization and hate, saying the things that Americans (until recently) wouldn’t express.

A polarizing figure like this has brought out the good in some (i.e. those who believe he’s an outsider to the establishment who will change the world for the better) and brought out the hate in others. Now that we see the kind of intolerance people can be capable of, as evidenced at Trump’s rallies, there’s no going back. We can no longer avoid facing our problems.

I’m convinced that this election campaign, as well as its unexpected result, was a mirror for the condition of the collective consciousness. Deep within, most of us are fighting an internal battle between the parts of us that want to be free and the parts that believe we should fall in line with an established, regulated way of being. At the same time, we’re fighting a battle between the positive, empathic, constructive, nourishing aspects of our personality and the negative, hateful, careless and destructive aspects. You might call these aspects the “shadow self”.

Hillary Clinton certainly doesn’t represent those positive qualities. But the idea of a feminine ‘mother figure’ to lead the people — her attempted public persona — does. People can relate to it, just as they can related to the polarizing masculinity of Trump. It’s as if we’re forced to choose between being positive and constructive with a sense of falling in line with the establishment, or rebellious and destructive with a sense that we can say or do whatever we want. For Americans, sticking with the establishment is wholesome yet uncomfortable because we’ve outgrown it, whereas rebelling against established norms leads to destruction, division and hate. I think this is how most people are feeling right now, and the U.S. election was a manifestation of this.

Now, let me explain why it’s all an illusion…

As most people in activist circles know, Hillary Clinton is not a progressive feminist figure who would be good for the United States. She is the establishment. When you see that she really is extensively corrupt and crooked, the illusion that following in line with an establishment candidate will bring happiness and stability to the U.S. nation is shattered. We see that our problems cannot be solved by following the crowd.

Hopefully you don’t need me to explain why going the other way – represented by Trump – is equally destructive. In my mind (and the mind of most others, until his campaign convinced people to see him as an outsider), Trump is also the establishment. Unless I turn out wrong and he has genuinely been an anti-establishment billionaire all along (the very statement is contradictory), it won’t take long for people to see why his election was a mistake.

But can you blame Trump voters? The other option was just as bad, and an increasing number of people are fed up with this establishment that makes increasingly destructive decisions that directly affect their lives, without their input or consideration of their needs over those of corporations. So what are voters supposed to do in this situation?

Free Yourself; Don’t Feed the System

The illusion of stability represented by Clinton was exposed for what it is when her corruption became apparent, so the only other (perceived) option for Americans was to support the wildcard and hope things turn out okay. But here’s the thing: you don’t have to support either of them. You don’t even have to support a third party.

Surely he’s not suggesting I don’t vote, you might think. That’s irresponsible! That’s what caused Trump to win in the first place! To not vote is precisely what I suggest. Trump didn’t win because people didn’t vote; he won because they did vote. This part of the election doesn’t seem to have been rigged, unless, as Makia Freeman points out, it was rigged in Trump’s favor for reasons we’re not yet aware of. Right now, it seems that Trump genuinely won — and it only happened because people voted for him.

So, at this point, the only way we can make anything better is to disengage from this crazy system while striving to improve the world without it. Instead of looking for stability by following the crowd and choosing the establishment candidate to lead us, or looking for newness and vitality by ditching compassion and choosing the angry “anti-establishment” billionaire, let’s make our own happiness and our own changes without worrying what others think.

We Need to Change

Our problems as a society go deeper than our willingness to elect someone like Trump. The only remedy is to replace our sense of apathy toward world issues with involvement, the willingness to extend ourselves for the sake of others, and detachment from the system — so we can genuinely change things. As Stephen Colbert suggested, we need to come together regardless of the ways we let politics divide us.

So, if you come to my doorstep, you can have free hugs no matter who you supported in the election. I have no problem with anyone who did what they thought was best by voting, even if I think it was misguided. Besides, we can’t make the world any better until we see beyond these petty differences. We need to change.

If you feel like the world around you is out of control, you’re right. But it’s only because we’ve adhered to these established systems for so long at the expense of our collective soul. We’re finally waking up and realizing something’s wrong, and by ditching an irrelevant system rather than supporting a candidate simply because he calls himself “anti-establishment”, we can focus on building a more sustainable model for stability worldwide.

This will sound cliché, but the system is broken and there’s no going back. For once, let’s change the way we approach the problem instead of doing the same thing over and wondering why nothing changes. Let’s leave the system behind, and give love, empathy and compassionate action a try.

Wes Annac is a writer, musician and blogger, with an interest in spirituality, revolution, music, and the transformative creative force known as love. Wes is the creator of The Culture of Awareness, a daily news site dedicated to raising social and spiritual awareness and supporting the evolution of the planet.

He also has a personal blog, Openhearted Rebel, through which he shares writings related to spiritual philosophy, creativity, heart consciousness and revolution (among other topics). He writes from the heart, and shares informative and enlightening reading material to help raise the planetary vibration and increase cultural awareness. (You can preview and subscribe to Wes’ Weekly Awareness Guide here.)