By Wes Annac, The Culture of Awareness

It’s safe to say that most people on the spiritual path would love to be free of attachment, which tends to hinder our growth and evolution. Attachment to achievement or material things is yet another manifestation of the nearly constant effort to fill the inner void, which, as we’re learning, we don’t want to fill at all.

Instead of filling it, the best thing we can do is sit with it, observe it and come to the realization that it’s our gateway to spirit.

The void we try so desperately to fill is actually our means of connecting with the divine; our inner Christ consciousness. Unfortunately, a lot of people – even spiritual seekers – try so hard to fill it that they forget that it’s where their Christed Self lives in the first place.

When we can give up the perceived need to fill the inner void with possession after possession and learn to sit with it, we’ll be able to observe ourselves and our tendencies, which usually take us away from the crucial inner silence that connects us with our higher consciousness.

We can’t make that connection until we learn to ease into the void and become comfortable with the nothingness, and there’s so much we’d learn about ourselves and our spiritual nature if we realized that the void’s an essential part of us and stopped trying to fill it.

All it takes is the willingness to be, as opposed to constantly doing.

There’s nothing wrong with working hard, especially if it’s spiritual work, but every now and then, we have to put down or work and remember to enter into the nothingness that connects us with the Self.

Krishnamurti tells us about attachment and how it can keep us from exploring or understanding the Self.

“We are the things we possess, we are that to which we are attached. Attachment has nobility. Attachment to knowledge is not different from any other gratifying addiction. Attachment is self-absorption, whether at the lowest or the highest level.

“Attachment is self-deception, it is an escape from the hollowness of the self. The things to which we are attached – property, people, ideas – become all-important, for without the many things which fill its emptiness, the self is not. The fear of not being makes for possession; and fear breeds illusion.” (1)

Ownership, he tells us, fails to incorporate love.

“Ownership denies love, does it not? To own is to be secure; possession is defence, making oneself invulnerable.” (2)

It’s difficult for rich or material-obsessed people to find the Self, because gold is their god.

“The rich have a peculiar atmosphere of their own. However cultured, unobtrusive, ancient and polished, the rich have an impenetrable and assured aloofness, that inviolable certainty and hardness that is difficult to break down. … Their god is the god of their gold. .. For the rich as for the poor, it is extremely difficult to find reality.”(3)

It’s generally difficult for the rich man to stop focusing on his wealth so he can explore his consciousness.

“How difficult it is for the man of possessions to be free! It is a great hardship for a rich man to put aside his wealth.” (4)

A lot of rebels and spiritual seekers don’t understand that in a way, the rich are suffering just as much as the rest of us. They aren’t suffering in the physical or material sense because physically, they have everything they’ll ever need, and they certainly aren’t suffering as much as impoverished families.

They, like most of society, suffer from a spiritual deficiency. They put all of their focus and attention in the external world, which most people have been programmed to believe is all that exists, and they’ve distanced themselves greatly from their true Self.

I’d go as far as to say that they’re more lost than the rest of society, and those of us with less wealth have at least learned the value of our family and our spirituality.

Most of society has yet to catch up in regards to spirituality and the values we should cherish, but they’re getting there and it’ll be a lot easier for them to reach this destination than those who only care about wealth, fame or any other vain concept.

Striving to “become something”, Krishnamurti tells us, is a surefire way to make ourselves miserable.

“As long as you want to become something, at whatever level, there is bound to be misery and confusion.” (5)

Some of you might disagree, because there are various higher roles that currently need filled and the conscious community is striving to fill them.

We need more truth seekers and speakers, more writers, musicians, and generally creative people who can express the spirit through the pen. It makes sense that a lot of conscious people would want to fill these roles, and personally, I think we need to fill them.

In using creativity (or anything else) to awaken the world, however, we’ll want to remember why we’re really here and why we’re doing what we’re doing. We aren’t here to flaunt ourselves or our awareness – we’re here to use the creative tools we have a knack for to inform, awaken and uplift the rest of the world.

The conscious rap group “Flobots” say in one of their songs, “If you’ve got more to give than you’ve got to prove, put your hands up and I’ll copy you”.

This lyric perfectly exemplifies the idea that we’re here to serve, not to be loved by the masses, and our creativity gets easier when we remember that our purpose is to use it to uplift the world – not to gain fame or credit for ourselves.

For some of us, fame or recognition might be a natural consequence of our work, and if so, we can accept and appreciate it without letting it go to our heads. If we stay sincere in our intent to use our craft to awaken and uplift others, we shouldn’t have any problem handling the results in a levelheaded way.

“The mind is not quiet when it is acquiring or becoming. All acquisition is conflict; all becoming is a process of isolation. … Such a mind is a dead mind, it is isolating itself through various forms of resistance, and so it inevitably creates misery for itself and for others.” (6) 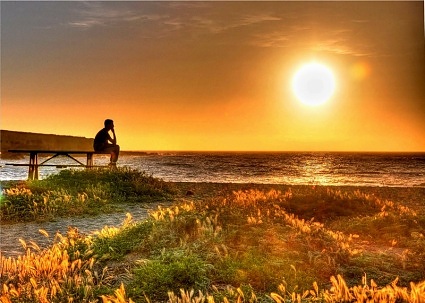 We could all use more soul searching. Credit: Openhandweb.org

Constant acquisition and calculation make for an obviously unsettled mind.

“The mind is never quiet if it is always acquiring and calculating; and must not the mind be still for truth to be?” (7)

Trying to expand ourselves in the material or identity-driven sense brings us away from our tranquil center.

“Self-expansion in any form, whether through wealth or through virtue, is a process of conflict, causing antagonism and confusion. A mind burdened with becoming can never be tranquil, for tranquillity is not a result either of practice or of time.

In striving to become something, we bind ourselves to the future instead of fully embodying, enjoying and appreciating this Now moment.

“Ambition in any form — for the group, for individual salvation, or for spiritual achievement is action postponed. Desire is ever of the future; the desire to become is inaction in the present. The now has greater significance than the tomorrow. In the now is all time, and to understand the now is to be free of time.

So according to Krishnamurti, endless ambition – however sincerely we want to use it to uplift others – can keep us from making the greatest inner discoveries we have yet to make, which we make when we can sit in quiet, observational, contemplative silence.

This is one of the most difficult inner states for spiritual seekers to maintain, because the mind and ego are frightened by the idea of complete stillness or nothingness. The mind and ego want to do big things, and in some cases, they want to use our sense of spirituality as the foundation to do those things.

I don’t think there’s anything wrong with creatively expressing our awareness, but in becoming so busy, we’ll want to remember to take time to explore our consciousness.

Exploring ourselves is essential if we want to evolve, and if we work so hard that we fail to go deep within now and then, our cup will eventually be empty and we’ll be unable to express the inner revelations that once flowed like a waterfall.

To understand the Self, we have to be willing to fade into the nothingness of our higher consciousness. We have to be willing to give up pride and the endless drive to achieve, and while achievement isn’t inherently negative, its negative side rears its ugly head when we use it as a reason not to explore our greater awareness.

With this in mind, let’s remember to lay down the seemingly endless need to become something and realize that we already contain what we seek within. We have everything we could ever want or need, and all it takes to realize this and access our fruitful inner gifts is to enter into that uncomfortable silence that connects us with the Eternal.

We might have second thoughts in the beginning, but we’ll have to push through them if we want to get to the other side.

We have plenty of support from various inner forces (like the higher self) that connect with us through the intuition, but it takes tapping into this support, which also requires the exploration of our inner silence, to realize it exists and get the most out of it.

I’m a twenty-one year old spiritual writer, blogger and channel for the creative expression of the inner universe, and I created The Culture of Awareness daily news site.

The Culture of Awareness features daily spiritual and alternative news, articles I’ve written, and more. Its purpose is to awaken and uplift by providing material about the fall of the planetary elite and a new paradigm of unity and spirituality.

I’ve contributed to a few different spiritual websites including The Master Shift, Waking Times, Golden Age of Gaia, Wake Up World and Expanded Consciousness. I can also be found on Facebook (Wes Annac and The Culture of Awareness) and Twitter, and I write a paid weekly newsletter that you can subscribe to for $11.11 a month here.

One thought on “Achievement or Understanding? The Choice is Ours”