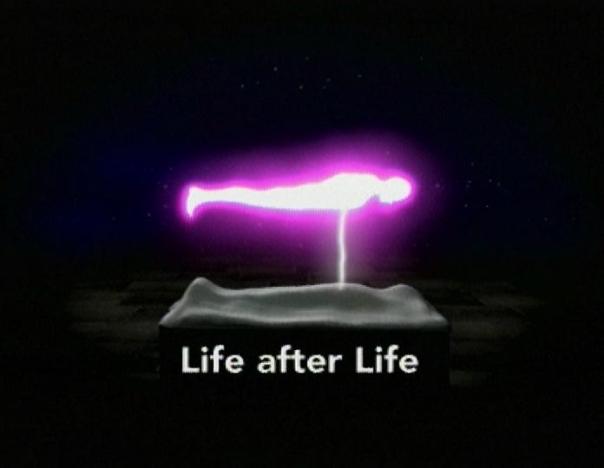 In another one of Joy’s accounts, we’re told about a dying father’s experience perceiving his young, departed son.

“About an hour before [another friend of Joy’s, who was dying of pneumonia,] died he called [his wife] by name and, pointing upwards, said: ‘Look, L-, there is B-! He is waiting for me. And now he smiles and holds out his hands to me. Can’t you see him?’

“’No, dear, I cannot see him,’ she replied, ‘but I know that he is there because you see him.’

“B- was only a child who had been taken from them a year before, when between five and six years of age. I could plainly see the little angel with curly flaxen hair and blue eyes, garbed in what I call the spirit robe. The face was just that of a winsome child, but etherealized and radiant as no earthly faces ever are.” (1)

Even this man’s child was able to be there for him, and this had to feel great for him. I bet he learned a lot that day!

“Not only is death an illusion, but my departed young one’s back with me! What more could I ask for?”

The realms we depart to are much freer; much more liberated, whereas this physical reality harbors a lot of pain and difficulty that harden our perception of life.

I’m happy for every person who’s able to transcend their hardened personalities upon entering spirit, because people who are rooted in negativity run the highest risk of getting lost in the negative and painful aspects of this existence that most people would love to transcend and never see again.

Joy continues, telling us that the father fell asleep for a while after initially seeing his ‘angel’ child.

“The father had been greatly weakened by the ravages of his disease and the joyful emotion occasioned by seeing his angel child seemed to exhaust what little vitality he had left.

“He closed his eyes and sank into a placid sleep. He remained in that state for about an hour, the angel child meanwhile staying poised above the bed with an expression of glad expectancy on his radiant face. Occasionally he looked lovingly at his mother.” (2)

If only his poor mother, who was losing her husband, could’ve seen that adorable little angel child stationed in the room, glancing at her. I don’t know how old this material is, but if she hasn’t already, the mother will eventually be able to see her husband and child again.

I’d imagine the mother could’ve really used a pick-me-up, and I think it’d be neat if people on earth were sometimes able to glimpse spirit like Joy, even for a moment. It’d obviously be too overwhelming for most people, but I think those who can handle it should get to see their departed loved ones at least once, even if the experience is a little startling.

It would be startling, but as long as they could handle it, I think a lot of people would appreciate the opportunity to know that they have a legion of helpers waiting for them in the afterlife, who they were close with but are forced to miss while they’re still alive.

Even a glimpse would be nice, and apparently, a lot of people do receive glimpses in their dreams or late at night, when they wouldn’t expect to be awake. I’ve talked to someone who told me they saw a departed relative in the wee hours of the morning, and this incident occurred a long time after the relative passed.

The relative assured this person they’d always be around, and I was delighted to hear this story given how much life after death interests me. This person and plenty of others have received a welcome confirmation of something we all know deep within, and I’m sure it helps quell the fear that death could be the end of existence.

According to Joy, the ‘angel’ son took the father’s hand after he left his physical body, and the two prepared for their journey into spirit, a place that was brand new to the father.

“The breathing of the dying man grew fainter and fainter until it ceased altogether.

“Then again I witnessed what had now become a familiar spectacle to me – the formation of the spirit body above the discarded earthly body. When it was complete the angel child clasped the hand of the now angel father, each gazed into the eyes of the other with an expression of the tenderest affection, and with faces aglow with joy and happiness they vanished.

“It was indeed a glorious sight! It made death, which nearly everybody regards as something awesome, enshrouded in dark, impenetrable mystery, appear beautiful and beneficent, indeed as the crowning proof of the infinite mercy and unfathomable love of the Heavenly Father.

“Had it not been for the presence of the weeping widow I could have clapped my hands and have sung for very joy.” (3)

I write a lot about spirit, but I certainly haven’t witnessed the things Joy claims to have.

She’s been able to witness death from both sides – the joyous reunion with departed family and the devastating sadness of the people who are left behind. The duality’s probably difficult to juggle, and I’m thankful that I don’t have an extreme or overbearingly strong psychic ability yet.

I’m excited to have that ability, of course, but seeing departed spirits and ‘angels’ would be difficult to come to terms with.

It’d be hard for others not to think the person who experiences these things has somehow gone bonkers. Of course, those of us who are starting to become conscious know that people with genuine psychic gifts aren’t bonkers, but having such a strong psychic perspective has to be difficult here on earth.

This account, like the rest of the ones we read from Joy, is very heartwarming and reassuring that when we lose somebody, we don’t actually lose them.

Given that time’s different in the fourth dimension than it is in the third, it probably doesn’t take very long for someone’s relative to cross over after them. It probably only seems like the blink of an eye before they’re able to greet their loved ones, but on earth, the wait to cross over seems endless (which is probably a good thing).

2 thoughts on “The Spirit World Chronicles: More on the Presence of Deceased Friends and Family – Part 6”