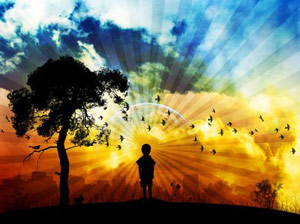 As consciousness continues to rise, humanity is being drawn together like never before.

We’re starting to understand our interconnected nature and the fact that we’re meant to run this planet together in the name of harmony and progress, and even though the number of people who’ve tapped into this truth is small right now, it’s poised to grow and grow.

The changemakers who’ve stepped up to the plate so far are paving the way for the rest of humanity to awaken and start expressing the divine qualities, and by the time our budding conscious revolution blooms into a planetary drive for divine change, we’ll have learned the importance of coming together.

The idea that we’re one consciousness experiencing itself is being understood by a growing number of people who are using the resulting inspiration to awaken others, and this is causing an inevitable snowball effect in the collective consciousness.

Everybody’s gradually becoming aware of the fact that our planet is being ruled by the few in a way that works for them and against the many, and our growing geopolitical awareness is inspiring us to want to change the planet for the better.

We’re here to be a force for real and lasting change, and to show the way by doing everything we can to bring humanity together and bring the divine qualities back to everyone’s attention. Our old ways of division and hatred are being subtly overshadowed by a growing sense of physical and spiritual awareness, and this has been happening for a long time.

People are awakening to new ideas and concepts as I write this.

Right now, someone’s mind is being sparked with information and insight about something that’ll ultimately lead them to understand spirit or help the planet (or both). The greatest minds of our history have been able to tap into spirit and help change the world, and I can envision humanity collectively accessing the spiritual inspiration those minds were able to access.

Our evolution has only begun, and even those of us who feel particularly advanced might still have a lot to experience and learn. We have yet to feel the most amazing things spirit has for us, but a lot of seekers are blazing the trial and anchoring an immensely pure vibration onto this evolving planet.

Trailblazers have existed in every time period, and they’ve all contributed something valuable to humanity’s evolution. Some of them have reminded us that we’re meant to come together to bring this planet into the light, rather than bicker into oblivion, and their actions have inspired the people who write about unity today.

Some of them have reinforced the importance of justice, reminding us that no force, however “elite” they classify themselves, should be allowed to get away with crimes against humanity like war and genocide.

Some have given us gentle but powerful reminders of the existence of spirit, and some have brought miraculous inventions into existence that accelerated humanity’s development. The conscious pioneers of the past have helped humanity in myriad ways, and now, we’re all being called to assist in the restoration of the planet.

I envision a united humanity starting (and finishing) numerous humanitarian projects designed to address and fix famine; inequality; environmental destruction; spiritual suppression and religious persecution; instilled division and hatred; I could go on and on.

We have a lot to address, and our unity is one of the first steps to changing anything for any extended period of time. Our artistic and creative abilities are growing as much as our geopolitical and spiritual awareness, and along with worldwide unity, the higher vibration we’re entering will help us passionately express our deepened consciousness.

Unity, while important to talk about and advocate now, will flow into our minds and hearts when the greatest effects of our ongoing shift reach us, and in the meantime, we can be individual forces for unity and expressers of a higher vibration. Let unity flow and awareness bloom in this new era, because we’re ready for the wonders that await us.

We’re ready to shed light on every aspect of society that doesn’t serve the common man, and we’re ready to do it as a united populace who understands the unjust rule of the one percent and the importance of making a change.

We seek to abandon a system that serves the few and sacrifices the many, and create a new social model that integrates the unique contribution of everyone. Everybody wants to live a better, more enjoyable life, and we’re being motivated to create that life for ourselves now.

We’re embracing a new way of life for ourselves and everyone around us, and make no mistake – everyone will benefit from the remodeled society we seek to create. Everyone’s needs will be taken into consideration, and our awareness and action now will create the world of our dreams in the future.

Wes Annac – Writing away about the importance of unity and awareness.

The Aquarius Paradigm features daily spiritual and alternative news, as well as writings from Wes and more. Come check us out!

See also Conscious Oneness, The Aquarius Paradigm on Facebook, and The Golden Age of Gaia.

One thought on “Unity and Awareness”